Jul 16, 2022
State Minister H.E. Ambassador Redwan Hussien and Assistant Foreign Minister of China, H.E. Deng Li held today (March 16) the second Ethiopia-China political consultation via teleconference.
The two sides exchanged views on bilateral, regional, and multilateral issues of common concern, further pledging to strengthen their Comprehensive Strategic Cooperative partnership. The meeting noted that frequent communications between Ethiopian and Chinese High-level leaders, including the recent visit of State Councilor Wang Yi to Ethiopia amidst a state of Emergency, demonstrate solid political trust between the two countries.
Speaking on the anti-COVID 19 cooperation between the two countries, Ambassador Redwan appreciated the multifaceted Chinese support, expressing Ethiopia’s keen interest to co-produce the vaccine at home with Chinese companies. Vice Minister Deng li, on his part, reiterated the Chinese pledge to provide vaccines in millions of dozes and vowed to encourage Chinese companies to produce the vaccine in collaboration with Ethiopia.
The two sides mentioned the Addis Ababa Riverside and Road Projects, including operation and maintenance of the Addis Ababa-Djibouti Railway, among others, as manifestations of commitments of the Ethiopian and Chinese governments to promote practical cooperation between the two countries.
In connection with this, Ambassador Redwan appreciated China’s plan to revitalize African economies as expressed in the Dakar-held Forum on China–Africa Cooperation, further requesting China to approve Ethiopia’s proposals to concretize the 9-point areas of cooperation that the Chinese President had proposed at the forum.
In their discussion about the situation in Ethiopia, Ambassador Redwan highlighted some of the measures taken by the government to ensure peace, despite the TPLF’s continued provoking of neighboring regions. Vice Minister Deng li said his country greatly appreciates the Ethiopian government’s peace initiatives, underscoring his government’s consistent position to solve the situation in Ethiopia through dialogue.
Discussing issues that need proper attention in the Horn of Africa, Ambassador Redwan Hussien appreciated the efforts of the Government of China to solve intra-state matters in the region amicably by sending one of its notable diplomats as a special envoy to the region.
In connection with this, he urges China to encourage the government of Sudan to solve its border dispute with Ethiopia amicably, encourage downstream states of the Nile to continue negotiating under the auspices of the AU, while appreciating the Chinese proposal to support Ethiopia to host a regional level peace conference that promotes peace and stability in the region.
The two sides expressed their commitment to further cooperate in international fora, mentioning vibrant cooperation between the two rejecting unilateral sanctions in the UN Security Council and Human Rights Commission’s sessions that threatened to compromise the territorial integrity and sovereignty of nations under the pretext of Human Rights violation.
Ambassador Redwan finally congratulated China for successfully hosting the Winter Olympics and Assistant Foreign Minister Deng expressed wishes to make the next political consultation in-person in China. 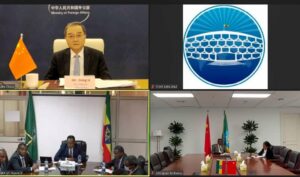