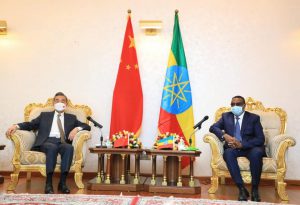 During their discussion, Mr. Demeke reiterated his delight to welcome the State Councilor and Foreign Minister Mr. Wang Yi to Ethiopia and thanked him for making time to visit Addis Ababa disregarding the unfounded rhetoric on the deteriorating security situations in the country and the siege of the capital city by terrorist forces.

He said the Minister’s visit during Ethiopia’s challenging time shows solidarity and reflects the true depth and strength of the political trust and strategic partnership between the two countries.

The Deputy Prime Minister and Foreign Minister applauded the long-standing relations and cordial friendship that Ethiopia and China have continued to enjoy by respecting equality, mutual interest, and trust between the two countries.

The government and people of Ethiopia deeply appreciate the balanced, principled, and committed relationship that Ethiopia and China have been able to forge so far, he added.

The discussion between the two sides touched upon the successful outcome of the FOCAC Ministerial Conference held in Dakar where the Deputy Prime Minister reaffirmed Ethiopia’s commitment to the success of FOCAC and bilateral activities.

In updating the Chinese Foreign Minister on the current situation in Ethiopia, Mr. Demeke spoke in detail on the destruction of lives and property due to the belligerent attitude of the TPLF.

He said the TPLF demonstrated its indifference to peace efforts while refusing to reciprocate the Ethiopian government’s declaration of the Unilateral Humanitarian Ceasefire last June.

Despite all the anti-government moves and thanks to the support of friends, today, the situation in Ethiopia on the ground is promising, he said.

The enemy is on its back foot following the decision of Prime Minister Abiy Ahmed to join the battlefronts, he added.

We have continued supporting the peace initiatives of H.E. Olusegun Obasanjo, which is being held under the auspices of the African Union, he said adding that the government of Ethiopia stands ready to extend its peace overtures in giving a peaceful resolution to the ongoing problem.

Mr. Wang Yi, on his part, said China, as a friendly country, is closely following the situation in Ethiopia and opposes attempts by external forces to impose their political interest in the domestic affairs of Ethiopia.

It takes two hands to clap, he said, indicating that the TPLF should have accepted the peace overtures extended by the Ethiopian government.

He expressed his country’s commitment to further engage in investment, trade, capacity building, and development cooperation with Ethiopia, in addition to boosting support to combatting the COVID-19 pandemic.

He said China has confidence in the capability of the Ethiopian government to take things under control and protect all Ethiopians and Chinese citizens residing in the country.

China’s confidence in the government of Ethiopia to stabilize situations in the country is demonstrated through my visit to Ethiopia today and China’s restraint from blindly accepting the alarmist calls of the evacuation of citizens from Addis Ababa, he added.

He finally said that the relationship between China and Ethiopia is and will remain to be solid and unbreakable.