Ambassador Teshome Toga had a discussion with heads and researchers of Taihe Institute, the most influential think thanks in China, on the current developments in northern Ethiopia.

Sep 14, 2022
Ambassador Teshome Toga had a discussion with heads and researchers of Taihe Institute, the most influential think thanks in China, on the current developments in northern Ethiopia.
Including Song Xiaoyong, the secretary general of Taihe institute, Professor Li Rong, Professor He Wenping and Wang Xiaoyong, who are working with the institute as a consultant and researcher on African and international issues, were among the participants in the discussion.
Ambassador Teshome explained on his briefing said that ignoring the Ethiopian government’s repeated calls for peaceful means of the conflict, the TPLF has started the war again for the third time, and is committing atrocities on the peoples of Tigray and the neighboring Amhara and Afar regions by killing innocent citizens, destroying infrastructures and a damaging health and education facilities.
Noting that the TPLF group does not even sympathize with the beneficiaries in the Tigray region, Ambassador said, several heavy trucks have not yet returned from Tigray that were sent to deliver relief food to the beneficiaries and it’s also stole around 570,000 liters of fuel from World Food Program (WFP) warehouse in Mekele.
The ambassador stressed that the Ethiopian government is highly committed to resolve the conflict peacefully and emphasized, the international community should support African Union-led peace process based on the principle of African solutions to African problems. Mentioned that China has stood with Ethiopia in all these difficult times, he called upon the officials and researchers of the institute to deliver their own contributions to further enhance the ties of the two countries on varies fields.
In the discussion, the Secretary General of the Taihe Institute, Song xiaofeng, on his part stated that Ethiopia and China have a strong relationship, and to strengthen this ties, the institute will working jointly with the embassy to bridge political, social and economic relations between the two countries.
Professor Li Rong, Senior Fellow of Taihe Institute and former Director of the West Asia and Africa Institute of China Institutes of Contemporary International Relations, on his part pointed out that Ethiopia is well aware of its large population, productive workforce, large arable land, and the gateway to the African market. And she asserted, expressing confidence that ,Ethiopia will overcome its problem through peaceful means and she is very keen to contribute from her experience to further enhance the relationship between the two countries.
Professor He Wenping, Researcher from the Institute of West-Asian and African Studies (IWAAS) at the Chinese Academy of Social Sciences (CASS),, on her part stated that both China and Ethiopia are countries with a long history, ancient civilization and also the world’s Fastest Growing Economies. Believing that the problem that faced Ethiopia will be solved through the African Union-led peace process. 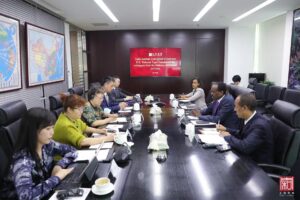